KALAMAZOO, MI — Six years after it was first announced, work to erect The Exchange Building is well underway in downtown Kalamazoo.

Ground was broken in April on the $52.7 million, 15-story project at the southeast corner of Michigan Avenue and Rose Street. The 345,000-square-foot building will take the place of what had been a public parking lot for many years.

About two years of work – in total – will be necessary to make the mixed-use commercial and residential project a reality, said Gregory A. Taylor, principal of Phoenix Properties LLC.

“We’re scheduled to complete the project in April to June of 2019,” said Taylor, who provided an update on the project to members of the Kalamazoo Rotary Club at noon Monday in downtown Kalamazoo.

When completed, the ground floor of the building will accommodate banking and other yet-to-be-announced commercial uses. One-third of the second level is to be available for office space. All of that office space is expected to be absorbed by Chemical Bank, which plans to relocate from 211 E. Water St. in the Globe Building and expand into larger space.

The bank will use a significant amount of space on the ground level of The Exchange as well as the second floor, Taylor said. All of the seventh floor will also be available for office uses.

The majority of the second floor, as well as floors three through six, will provide space for parking, approximately 285 spaces. Apartments will be located on floors eight through 14. Part of the space on the 15th floor will be enclosed for office space. The rest will be an open terrace.

Here are 12 additional things to know about the project and its progress:

-Some of the open terrace space on the 15th floor of the building may be used to develop a restaurant or bar. But no solid plans have been announced. “There will be a sun deck and an area with some seating and some common amenities like that,” Taylor said. “That will be on the rooftop. All residents and office users will be able to share in that.”

-The towering, 230-foot-high crane that is key to the building’s construction will be part of the downtown skyline for at least another year; until the project is much nearer to completion. Taylor said the building will be built around the massive crane, more or less, and it will be removed vertically from the center of the structure when it is no longer needed.

-“We’re nearly finished with pouring the first floor columns and floor,” Taylor said. “And once that’s completed, we’ll continue the process of pouring additional columns and concrete floors right through the winter.” He said there is no specific part of the construction that workers are trying to finish before winter begins. “We’ll be progressing from floor to floor,” he said.

-The deepest foundation structures are about 60 feet deep. They are among approximately 250 auger-cast piles (concrete and steel pilings) that are below ground level. 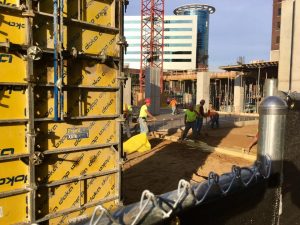 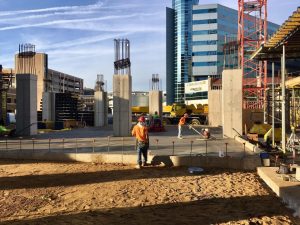 -“By this time next year, the structural building should be completed and we should be partially enclosed and starting interior finishes,” Taylor said. On that occasion, he said there will be a topping-off ceremony to mark the milestone – “where we have finished all structural components up to the 15 floor.”

-The project has doubled in size since it was first conceived — in terms of the square footage and cost. In 2011, the project was valued at $28 million and was to be eight stories with commercial space and 50 apartments. The project is now valued at $52.7 million and has 15 floors with commercial space and 133 apartments. “We looked at variations — at 5 floors, then we looked at 8, then 12 and 15,” Taylor said. He said 15 stories was “kind of the sweet spot” for the development, “where we could have the right number of apartments, parking spaces and commercial space.”

-Chemical Bank is thus far the only business that has yet announced plans to be a tenant of the building. It will have a sizeable banking presence on the ground floor and utilize most of the second floor that is not used for parking. About one-third of the footprint of the second floor is for office space. The remainder is parking.

-The apartments will range from studios to those with two bedrooms and two bathrooms, Taylor said. He would not say how large or small any of the units will be, but said there will also be one-bedroom apartments. He said monthly rental rates have not yet been set, but said he expects them to be comparable to other luxury style apartments in the downtown.

-Orion Construction of Grand Rapids is the construction manager and general contractor for the project. While there wasn’t an open bidding process for the work, several companies, including a Kalamazoo-based general contractor, made proposals. Orion was chosen, Taylor said, because of its experience with about a dozen similar projects over the last few years, and because it was the most cost-competitive.

-About 225 construction jobs are expected to be created throughout the two-year building process. “A lot of the subcontractors on the project are either based in Kalamazoo or have Kalamazoo offices,” Taylor said. Architectural work is being done by Byce & Associates Inc., of Kalamazoo.

-The project is primarily being financed privately. But it is also being supported by a $6.4 million Michigan Community Revitalization Program loan and an agreement by the Michigan Strategic Fund Board to allow the project to capture $7.7 million in local and school taxes. Kalamazoo’s Downtown Development Authority is also contributing tax-increment financing funding of $1.3 million and Downtown Kalamazoo Inc. is providing a grant of $150,000.

-Phoenix Properties is partnering with fellow development company PlazaCorp Realty Advisors Inc. on the project. The Kalamazoo companies are co-developers. “I’m responsible for working with the construction and architectural team to help complete the project but also we’re responsible for the leasing and preparation to manage the property after it’s occupied,” Taylor said.