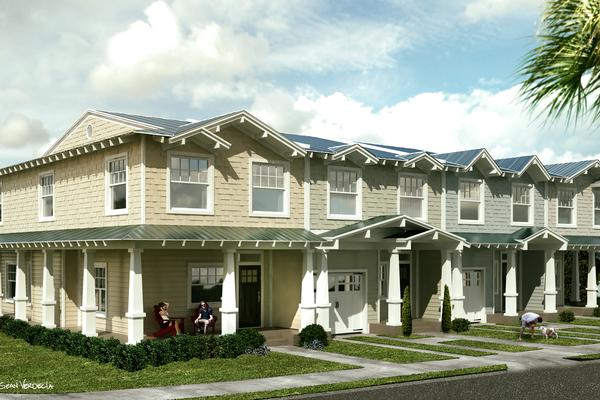 A Tampa developer is increasing his bet on the city’s Seminole Heights neighborhood, planning four new townhouses at the corner of West Giddens and North Florida avenues.

Wesley Burdette, who is about to begin construction on the nearby Warehouse Lofts apartments, this week starts marketing the houses, which will feature Coastal Craftsman architecture. They will range from 1,800 to 2,000 square feet, with roughly 20-foot yards, and be priced from $289,000.

Like the Warehouse Lofts — in which an old warehouse at 4513 N. Florida Avenuewill be converted into 46 apartments— the townhouses are a small project. Burdetteclosed on the warehouse in early December and said he is preparing to start interior demolition on the building next week.

“I think it’s critical to the continued success of Seminole Heights, to be able to maximize the limited land we have,” Burdette said.

Burdette paid $48,000 for the lot at 113 W. Giddens Ave, which has two single-family homes on it — both of which will be demolished. He said he will begin construction as soon as one of the homes is under contract. He estimates construction costs at $700,000 and said he will likely do the project with cash but has the option of a construction loan.

The townhouses are a bit of departure from tradition in Seminole Heights, which is known for its historic bungalows. And while Burdette, a mortgage banker got his start in the neighborhood flipping single-family detached homes, he says he sees a need for more new construction — and a different product type.

“My gut’s telling me Seminole Heights is about to start making the turn to the second phase of growth,” Burdette said, “and new homes are going to become a bigger part of the equation, which i know is blasphemous for many.”

Still, he said some builders are having success with new-construction replicas of the bungalows in Seminole Heights and that the townhouses will appeal to a buyer who wants less maintenance and more space.

“Seminole Heights is a fun place to go, and do you want to be doing yard work on the weekends?” he said. “As we’re starting to see more younger couples coming in, they’d like to own something, but they also like lower maintenance.”

More information on the project will be posted on the Facebook page for Burdette’s company, Heights Equity LLC.